Collaboration is important, but budgeting for it isn’t easy. Any organization would want to find a way to get the most value out of a collaboration platform without breaking the bank. Large organizations need to be especially wary since the wrong solution could wind up costing them hundreds of thousands of dollars.

Among collaboration solutions, Teams appears to be more expensive than its competitors. The price tag on the solution, its respective calling features, and the rest of the Microsoft Suite should be high. However, Teams is much more affordable on the enterprise level than its competitors.

Pricing for Teams and Zoom

Where an issue like price is concerned, it’s important to not beat around the proverbial bush. Each collaboration software offers a free version. These versions are too light in features to be used in a large organization. As the price goes up, so do the features each platform offers. So which price is best?

For large organizations, Microsoft offers its best licenses, with none better than Office 365 E5. This license includes the desktop version of all Microsoft’s apps including Teams. It features advanced security, analytics, and voice capabilities. Guard your mailbox with Exchange Online Advanced Threat Protection and make, receive, and transfer calls with Microsoft Phone System.

The total cost of this license is $35/user/month. A Microsoft Calling Plan would raise the price to $47, but it's an optional feature. The value of Microsoft 365 cannot be understated even without voice access. It includes Teams, Outlook, OneNote, OneDrive, and SharePoint.

Zoom offers a price per host instead of per user. This makes it sound like a better deal already, but that’s not actually the case. Zoom doesn’t have a document co-authoring application or file storage. Zoom users will have to use third-party apps.

Dropbox is an alternative to SharePoint and OneDrive. However, it comes with its own price tag. Dropbox for Business starts at $20 per user. For enterprise, there is no listed price on Dropbox’s website, though it’s hard to imagine it would be any less.

Zoom users may also use Slack for messaging. Like Dropbox, Slack doesn’t list a price for its enterprise option, but its “plus” plan is $12.50 per user.

Adding all these things together turns Zoom, an option that once seemed cost-effective, into a budgeting disaster.

Numbers are generally much easier to understand with perspective. Let’s examine a hypothetical scenario where two fictional companies with 5,000 users each deploy Microsoft and Zoom.

Company A deploys Microsoft Teams. Its users won’t settle for less than Office 365 E5 licenses, though they decide against paying extra for calling features. Company A must now pay $35 a month for each of its 5,000 users, coming to $175,000 per month.

Company B deploys Zoom. Unlike Company A, Company B will only pay a price per host on its Zoom solution. The enterprise package for Zoom requires a minimum of 100 hosts, but an organization such as this would have more than 100 people who need to host meetings.

Company B decides then to deploy the solution for 1,000 hosts. At $19.99 per host, Company B pays $19,990 a month for its Zoom solution. Quite the difference from Company A, or at least it would be if that’s where it ended.

As Company B grows accustomed to Zoom, its users soon realize they don’t have a place in Zoom to store files, let alone easily share them. A few users suggest using Dropbox to solve this problem, as many of them already do so. Despite some concerns about the platform, Company B opts to deploy Dropbox . To save money, the company chooses the standard Dropbox for Business solution, costing $12.50 monthly per user.

Another problem arises for Company B. Many of its users are disappointed at Zoom’s lack of a chat feature and begin using Slack to compensate for it. The IT staff at Company B decide deploying Slack is the path of least resistance. Once again looking to save money, it opts to deploy Slack Plus, costing another $12.50 per user per month.

At perhaps the most conservative estimate, Company B now pays $144,990 a month for this cluster of solutions. That may still be less than Company A pays for its Microsoft Solution, but there’s a good chance Company B would wind up paying more. Having only 1/5 of its user base with host privileges in Zoom hinders its collaboration abilities. Not having the best versions of Dropbox and Slack would also.

A more realistic number for Company B would be $79.98 per user per month, covering its expenses in Zoom, Dropbox, and Slack. This totals to a monthly cost of $399,900 — much more than Company A paid for its Microsoft solution and a lot more hassle.

The Threat and Cost of Shadow IT

What would happen if Company B chose to not deploy Dropbox or Slack? They could presumably use Zoom without the other applications. Unfortunately, it's not always the company’s choice.

Dropbox and Slack are both easily purchased by individual users using corporate credit cards. Companies could wind up paying for these solutions even when they don’t want to. This is what we call shadow IT. 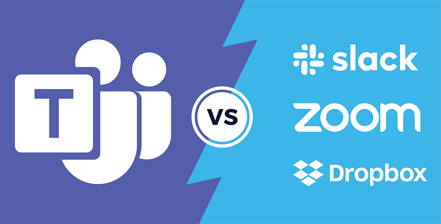 Shadow IT is by its very nature unmanageable and can be detrimental to a company’s finances and security. Often, shadow IT leads to data loss and compliance issues. It can also create redundancies that reduce efficiency and waste money.

It does, however, come from an understandable place. Shadow IT usually occurs when a company's chosen technology doesn't have the features its users need. This makes them feel they have no choice but to find an alternative. Because of Zoom’s lack of certain features, it puts an organization at risk of shadow IT.

The True Value of Teams and Microsoft 365

On the surface, Zoom may appear cheaper than Teams. In practice, not only is Teams the cheaper of the two, but it’s also more valuable for a large organization. Zoom’s lack of features invites the dangers of shadow IT and can create over-complicated, expensive, inefficient solutions. Alternatively, Teams leaves no holes for shadow IT to creep in and hurt your company.

Teams can save your workers up to 4 hours of time per week.

A large organization can save money with Teams and Microsoft 365. It comes at a better price and offers far more value as well. Plus, it can save your users up to 4 hours of time per week. The larger the organization, the more benefits a Microsoft solution can provide.

Getting Started With Microsoft Teams

When you use a collection of platforms such as Zoom, Dropbox, and Slack, it can become expensive quickly and leave employees confused. It also leaves IT with the difficult task to make it all work.

At Continuant, we understand how complicated a technology landscape can be. We've helped organizations improve their communication systems for more than 25 years.

We'd like to offer the same to you. In a free 30-minute assessment, we'll learn how your organization works, what you want to achieve, and what challenges need to be overcome. Next, we will design, deploy, and maintain a solution that will transform the way your organization collaborates.

Your UC environment should save you time and reduce expenses — not cost you more.

Free up your IT staff. Empower your workforce. Reduce costs.

* Editor's Note: This article was originally published in June 2020 and has been revamped and updated for accuracy and comprehensiveness.