Microsoft Teams versus Zoom: Which is Better for Large Organizations?

Unified communication solutions can keep your business operating through times of crisis. When entire workforces must go remote, high-end collaboration technology is a necessity. The question then is this: between Microsoft Teams and Zoom, which is the better choice for your organization?

With the widespread adoption of collaboration platforms, Zoom has become increasingly popular. Though many love this solution for its aesthetic appeal and ease of use, Teams has plenty of its own useful features, including the ability to integrate with existing voice systems.

The Features of Both Platforms

A unified communications (UC) platform is nothing without its features. Both Teams and Zoom boast similar, basic collaboration functions such as video and audio conferencing. When it comes to more specific features, the two differ widely.

As part of the Microsoft 365 suite, Teams can take advantage of the many applications contained within. This includes Outlook’s calendar, SharePoint’s file-sharing, and OneDrive’s file storage. A basic business license allows access to the most important ones for only $5 a month per user.  However, most large organizations buy Microsoft's more expensive E5 license for $35 per user per month. 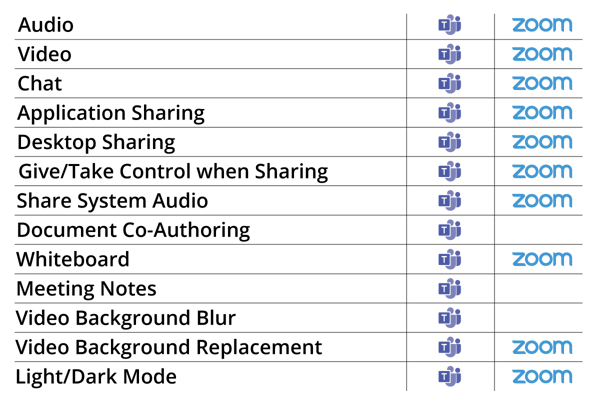 The image above is a snapshot of the features in June 2020.

Zoom provides little else beyond audio and video conferencing, but it does both very well. For $150 a year, the cheapest Zoom subscription costs less per user per month than Microsoft. Though it only includes 9 licenses, it’s perfect for small businesses with smaller teams.

Teams is nothing if not secure. Not only is data encrypted end-to-end with Teams, but it’s also encrypted both in transit and at rest. This means any data from any conversations made on Teams is never vulnerable to outside threats. In fact, Microsoft is known to fend off 5 billion cyber threats per month, thanks to an investment of $1 billion annually in cybersecurity.

That’s not all Teams has going for it in terms of security. The platform also features multi-factor authentication (MFA) and Rights Management Services (RMS) support. All the security features that apply to conversations in Teams apply to file sharing as well. Sensitive documents will be able to make their journey through the cloud safely.

For large businesses, schools, and government organizations, security is nothing to be taken lightly.  Microsoft understands this and has built Teams with the features it needs to stay secure.

Microsoft is determined to be perfectly transparent for its customers. With regular transparency reports, there won’t be any misleading information about how its data is encrypted, nor what happens to it. In fact, Microsoft has stated it never sees any of the data that is encrypted and sent through its platform.

Microsoft also boasts a plethora of security certifications, including HIPAA, HITECH, ITAR FedRAMP, FISMA, EU Model Clauses / Privacy Shield, ISO, SSAE, and SOC 1-3. A complete list of certifications as well as more information regarding Microsoft’s trust and security can be found at the Microsoft Trust Center.

Zoom has a different approach to security. With its infrastructure stored in third-party data centers, Zoom has a lot more digital ground to cover in terms of security. Fortunately, with two-factor authentication, passcode protection, and a full suite of host controls — it has all the necessary features to keep out uninvited guests.

For the most part, Zoom’s platform has enough security features for the average user to rely on. However, it's had trouble in the past with a lack of transparency and the security disaster known as "zoombombing."

“Zoombombing” was an infamous practice that got no small amount of media coverage in the early stages of COVID. The concept is simple. Someone would take advantage of Zoom’s lack of encryption, as well as the feature that allows a user to join a meeting from a single link multiple times.

They would then jump into a Zoom meeting uninvited. What came next would be limited only by the bomber’s imagination. History has shown these individuals were not above bombarding the meeting with racism, pornography, gore, other forms of potentially traumatic imagery, and threats of violence.

Zoom has taken steps to improve its security. The company has changed for the better since the controversies broke out in the spring of 2020. They have added new security features and largely made “zoombombing” a thing of the past.

Unfortunately, the damage has been done. Google, NASA, most government entities in the United States, the government of Taiwan, and even certain education organizations like the New York Public School System have forbidden their users from continuing to use Zoom.

Both Zoom and Teams have intuitive interfaces that don’t lack visual appeal. Some say Zoom is the better looking of the two, but that’s largely subjective. Many users enjoy the gallery view of Zoom, which makes more participants visible during a meeting. However, Microsoft Teams now supports not just a gallery view, but a virtual auditorium with Together Mode as well.

At the end of the day, the interface is more a matter of taste than anything. It shouldn’t be the most important factor in making your final decision.

Zoom is also voice compatible, but it doesn’t offer nearly as many options, especially when it comes to connecting to existing voice technology. Since Zoom is chiefly concerned with video conferencing, it’s not ideal for users looking to protect voice investments.

Both Teams and Zoom offer free versions of their app. Customers unlock more features by paying for premium plans. For Zoom, this chiefly includes allowing a higher number of participants in meetings and allowing a greater number of hosts on a single server. Teams’ premium tiers unlock more features not just within Teams, but within the entirety of the Microsoft Suite. This is even better for current Microsoft customers who can leverage existing licenses in Teams.

As for which one’s cheaper, that’s not such a simple answer. Teams is more expensive with its Microsoft licenses, but these licenses provide access to all the features of applications such as SharePoint, OneNote, OneDrive, and Outlook. Zoom does not.

In fact, to get all the features Teams offers with a Zoom solution, it would require using third-party apps such as Slack and Dropbox. For small businesses, this isn’t a bad thing. These different platforms can provide a higher level of flexibility. Furthermore, it gives businesses the option to only pay for what they want, or rather need. 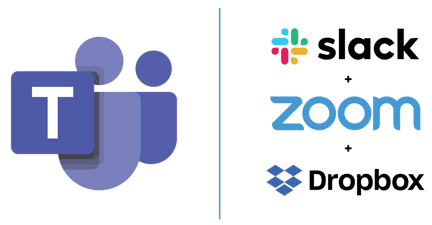 Teams vs Zoom: Which is The Better Choice?

For users in large organizations, especially those in government, education, or healthcare, both options are perfectly serviceable.

With incredible value and robust security, Teams will be the better option for many. In fact, organizations with Office 365 licenses are already paying for it.

Zoom still stands as the simpler and easier to use of the two platforms, but Teams isn’t too far behind. Even so, Zoom is a viable system for smaller organizations that don’t need to leverage all the features present in the Office 365 suite, though having them could never hurt. As Zoom continues to iron out its security issues, this will become more and more true.

Getting Started With Microsoft Teams

Your communication technology needs to keep your users connected. Microsoft Teams offers a truly unified communication experience with all the features platforms like Zoom, Dropbox, and Slack offer individually.

Want to learn what the journey to Microsoft Teams could look like for your organization?

Schedule a 30-minute call in which we'll learn how your organization works, what you want to achieve, and what challenges need to be overcome.

* Editor's Note: This article was originally published in June 2020 and has been revamped and updated for accuracy and comprehensiveness.

Microsoft Teams Meetings for the Enterprise