Microsoft Teams Meetings for the Enterprise

Microsoft Teams made an appearance at Enterprise Connect 2019. Microsoft took advantage of this event to show off some of the amazing new things their communications app has to offer. The main takeaway from the event is Teams has improved how it conducts meetings. Obstacles that may have made adopting the system difficult in the past now have simple solutions.

Microsoft's One and Only Meetings Platform

Not long ago, Microsoft announced the end of Skype for Business, hoping to use Teams as its only collaborative app for Office 365. Back then, fans of Skype for Business expressed concerns about losing some of the features they had become familiar with after using it for years. Fortunately, Teams has eclipsed Skype with intelligent new meeting features.

Teams' intelligent meetings allow users to quiet background noise, join meetings muted, and notify users if they’re muted should they want to speak. It’s also possible to join a Teams meeting from anywhere at any time, only requiring an invitation and a device capable of running the meeting, such as a smartphone or computer.

Third-party attendees such as vendors or guests won’t need to be in your system. In fact, they won’t even need to have the Teams app installed. It’s also possible to join a Teams meeting through the Microsoft Edge browser and Google Chrome.

Teams now has in-line translation capabilities. Your users will be able to communicate with each other in their native languages on the fly, with over sixty languages supported. For team members who struggle to read (1 in 5 users today reportedly suffer from dyslexia), Teams’ immersive reader will alleviate the struggle. It can change text and word preferences or read text messages aloud.

Federated meetings will also give you more control over who participates and when. Dial-in feedback support will help them participate even if things go wrong. What’s more, Teams meetings now support up to 250 people.

The Other Parties Involved

Microsoft has partnered with other organizations to ensure their products will function within Teams. Conferencing solutions from Crestron and Polycom work with state-of-the-art Teams Rooms. Meanwhile, BlueJeans seamlessly integrates with a Microsoft solution to provide high quality video collaboration. 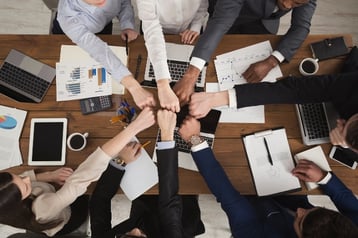 AV is an important aspect of modern collaboration. Organizations want to be able to communicate in real-time with the highest possible quality. Teams’ video is making waves in the industry and is largely considered the best of its kind.

Ready to begin hosting enterprise level meetings with Microsoft Teams? Schedule a technology assessment today to see what Teams will do for your organization.

* Editor's Note: This article was originally published in June 2019 and has been revamped and updated for accuracy and comprehensiveness.