Avaya Support: When It Makes Sense to Work with the OEM and When It Doesn’t

In a previous blog, “Avaya System Owners at a Crossroads,” I addressed the topic of Avaya support by answering a question we hear frequently: “When is software support needed, and when is it a waste of money?”  And because some of you have asked about Avaya’s End of Manufacturer Support (EoMS) policy, it seemed to me to be a good idea to address both topics in one blog.

This is part 2 of a 5-part blog series on Avaya Support. 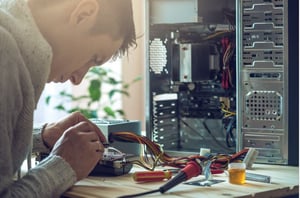 In writing the “Crossroads” blog, I intended to point out that, while Avaya third party maintenance (TPM) and support is sometimes the best choice for Avaya system owners, there are times when it is not. Where TPM is a good fit, service levels can be higher and costs lower.  We believe TPM is ideal for all Avaya system owners who are using systems that are at End of Manufacturer Support (EoMS) while planning a migration to a Unified Communications solution like Microsoft Teams.

Nevertheless, there are times when the better choice is to stay with Avaya for the maintenance and support of Avaya systems.  Some Avaya system owners, in fact, deem the Avaya solution the best choice for the long-term, often choosing to upgrade their Avaya systems, which inevitably means purchasing the mandatory software support that accompanies each upgrade.  Because Avaya’s latest release (currently CM 7) is what we call “patch-dependent,” Avaya is actively developing patches for this system.  To obtain these patches, the system owner must have an Avaya software support agreement.

Just want the highlights of this blog series on Avaya Support?

Moving Away From CM 6 (Or Older) Systems

Systems that are CM 6 or earlier, however, are an entirely different story. For the older systems, Avaya has made it clear that no further patches will be developed.  Of course, if Avaya system owners stay with the OEM for system maintenance and support, Avaya will continue to require those customers on an Avaya support contract to purchase Avaya support, even though the owner of the older Avaya system will end up paying for nothing.

So, Who Does Need Avaya Support?

I believe that one of the main reasons Avaya announces EoMS is to motivate Avaya system owners to purchase upgrades and the accompanying mandatory software support.  Avaya’s own Product Support Notices and End of Sale Notices may state that there are many downsides to systems being EoMS – downsides that could actually be considered risks. These downsides include Avaya policies such as “no guarantee of parts availability,” customers being relegated to Avaya’s “best effort” support, and the threat that Avaya will be unable to solve a problem without the system owner purchasing an upgrade and the mandatory software support that comes with it.

Let’s move to “best effort.”  Is “best effort” the best that an Avaya system owner should expect?  Not at all.  Continuant is an example of a TPM provider that will guarantee an SLA for Avaya systems, regardless of vintage.  We have the technical expertise to be able to back up such an SLA, thanks to our Avaya engineers.

Are upgrades ever the only way that a problem can be resolved?  We have supported millions of Avaya users on thousands of Avaya systems for the last twenty years, and we haven’t seen it yet.

Download the executive summary of this 5-part blog series on Avaya Support, including a personal take on where the industry is headed and how to prepare your organization for the future.

An example of a client that has chosen Continuant to maintain and support its Avaya systems is sports apparel giant Nike.  Nike, which currently has Avaya CM 6.3 systems, has determined that the Avaya systems will be replaced with Cisco systems moving forward.  Continuant is able to maintain and support Nike’s systems around the globe while Nike plots the course for its future solution deployment—which will take place over the next several years.  Imagine how much smoother the transition to a new solution will be for Nike working with a TPM provider such as Continuant, a company with a track record of supporting Avaya systems, while also able to support the new Cisco systems, if Nike so chooses.

There are times when third-party maintenance and support for Avaya systems is not the best choice. But when TPM does seem to be the best option, but when it is the right decision for the system owner to make, it is overwhelmingly not just “right,” but the best.

Request a quote today, and in the meantime,

to find out how our services can keep your Avaya PBX running for as long as you need it.