If you’re an Avaya user still thinking about upgrading your Avaya systems, you just might want to think again.  While Avaya has been a leader in the Business Communications market for most of its 16 years in existence, there are at least three warning signs of a serious chink in the armor.  For companies considering an upgrade to their systems, we think there’s a compelling case to be made for finding another alternative.

Let’s take a look at three recent events that, taken individually, may not signal more than a temporary spot of trouble for Avaya. Taken together, these indicators look like a Perfect Storm—and a serious reason to reconsider following through with that system upgrade.

Nothing casts a pall over a company’s ability to get financing more than a bad credit rating.  For this reason, when Moody’s Investors Service downgraded Avaya, Inc. in a February 2016 release (Moody’s Long-term Corporate Obligation Rating) from B3 to Caa1, the corporate world took notice.

The announcement attributed the downgrade to Avaya’s continuous decline in levels of performance as well as major concerns about Avaya’s ability to refinance its debt in advance of their maturities. 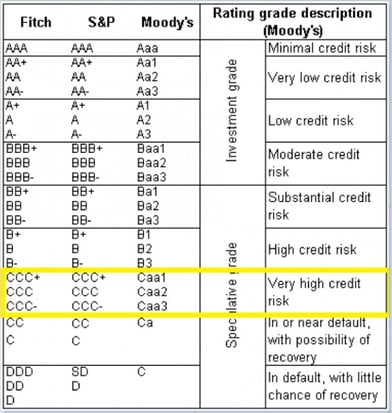 While Moody's Long-term Corporate Obligation Ratings are opinions of the relative credit risk of fixed-income obligations with an original maturity of one year or more, they reflect both the likelihood of default and any financial loss suffered in the event of default. Following are highlights of the Global Credit Research piece Moody’s Investors Service published on February 12, 2016.

New York, February 12, 2016 -- Moody's Investors Service ("Moody's") downgraded Avaya, Inc.'s corporate family rating to Caa1 from B3. Moody's also downgraded the company's probability of default rating to Caa1-PD from B3-PD, its first lien debt facilities to B2 from B1 and its second lien notes to Caa2 from Caa1. The downgrade was driven by continued declines in performance as well as concerns about the sustainability of the current capital structure including its ability to refinance $600 million of debt maturing in 2017. The ratings outlook is negative.

The Caa1 corporate family rating reflects Avaya's very high leverage (greater than 8x as of December 31, 2015) and concerns about the sustainability of the capital structure. The rating also reflects the company's very high debt service and other requirements at a time when the enterprise telephony market is evolving. Debt service, pension service and capital requirements of the business leave little cushion to support unforeseen operating challenges or to make material debt repayment or critical acquisitions.

While the company could likely limp along if all maturities were pushed out to 2020, the current capital structure is impractical and at worst, prevents some customers from choosing Avaya.

The negative outlook reflects Moody's expectation for declining revenues and concern that the company may face challenges in refinancing 2017 and 2018 debt maturities.

The principal methodology used in these ratings was Diversified Technology Rating Methodology published in December 2015. Please see the Ratings Methodologies page on www.moodys.com for a copy of this methodology. Link to the full article: Moody's Downgrades Avaya to Caa1.

Avaya Asset Sale in the Works?

Dave Michels, principal analyst at TalkingPointz, suggests that Avaya is considering an asset sale as a way to deal with several upcoming debt maturities: $600 million due in October 2017, with an additional $5.3 billion maturing between 2018 and 2021. Previously, Avaya successfully refinanced its debt maturities, but that will be harder this time, he asserts. In February, Moody's Investors Service downgraded Avaya from B3 to Caa1, reflecting "concerns about sustainability of the capital structure." And in April, Standard & Poor's Ratings Services lowered Avaya's credit rating from B- to CCC.

What Avaya’s predicament will mean for the future of customers with existing Avaya systems installed is hard to say.  Reuters recently reported, “Private equity firms Silver Lake Partners and TPG Capital are mulling the sale of Avaya Inc that could value the telecommunications equipment maker at between $6 billion and $10 billion, including debt,” citing people familiar with the matter. Or, to put it another way, "They're carrying a huge anchor of billions of dollars in debt that's tied to their ankles," said Joe Rittenhouse, president of business development and managing partner at Crystal Lake, Ill.-based solution provider Converged Technology Professionals.

In response to media inquiries, Avaya’s spokesperson “declined to comment,” but instead (according to press reports) pointed to the comments of Avaya’s CEO Kevin Kennedy on the company's recent earnings call, during which he noted that "Goldman Sachs is helping Avaya evaluate expressions of interest that have been received relative to specific assets, as well as explore other potential strategic opportunities."

Silver Lake and TPG, according to the Reuters report, also declined to comment to the media.

Avaya’s $1 billion of 7 percent first-lien notes maturing April 2019 have lost 25 percent in value in the past 12 months, according to Trace, the bond-price reporting system of the Financial Industry Regulatory Authority. The company’s $1.38 billion of 10.5 percent second-lien bonds maturing in 2021 last traded at 28.5 cents on the dollar on June 6 and have lost more than 60 percent in value over the past 12 months, Trace records show.

In an attempt to make up for revenue shortfalls, Avaya has historically turned to massive layoffs. According to the rumor mill, 2016 will be no different, with some suggesting that Avaya could possibly shed between 20-30 percent of its current workforce, combined with an accelerated migration to off-shore labor.

What will this mean for Avaya owners? Typically, massive layoffs like these result in even slower R&D, poorer customer service, and further weakening of market share.  Whether the rumored layoffs will be as bad as some might speculate, when a company such as Avaya starts chopping staff, morale drops and the cycle of bad service that has plagued the company for years gets even worse. Read more: Avaya Layoffs.

An Alternative: Break the Cycle of Dependence

In our view, one strategy upon which Avaya has come to rely is what we call the “OEM Cycle of Dependence.” What this means is that the Original Equipment Manufacturer—let’s say Avaya for the sake of argument here—prefers to keep its customers locked in via a (vicious) cycle of dependence that limits that customer’s ability to “get out” once a contract is signed.

How it works:  A customer purchases a system along with software support.  There are technical bugs that require the customer to install patches.  New patches require software support because patches come from the manufacturer.  Eventually, enough bugs will be identified that a new release becomes available and software support requires the upgrade to keep supporting it.  The customer, now on the new version of the system, starts the cycle over.

In the case of Avaya, many customers have taken Avaya to task for its poor service and required software support that limit their flexibility and trap them in the OEM Cycle of Dependence. Avaya compounds this by attempting to force its customers buy both software support and hardware maintenance from them.This is great news for manufacturers.  Manufacturers are able to keep customers in a cycle where, at the end of the day, customers pay more money to fix problems that require more fixes and more upgrades.

There is a way out of this vicious cycle, and that is to find a company that does not promote any one particular product line. Independence from an OEM means that the service provider can view your situation objectively and help you make the best decision for your company’s particular needs. There are many excellent independent service providers, such as Continuant, who are ready, willing, and able to help you reduce the risk of further investment in a company with an uncertain future.

Scott Graham was one of the four original employees of Continuant’s predecessor company, Telecom Labs Inc. (TLI), joining in 1996 as Operations Manager. Prior to joining TLI, Graham was an industrial engineer at Cascade Corporation in Portland, Oregon; and also worked for Frametech Inc. of Honolulu as an industrial...